The No. 13 ranked Virginia Tech Hokies sent their 16 seniors out on a positive note with a 37-7 win over ACC and in-state rival Virginia. The win was the 10th straight for the Hokies and seventh straight over the Cavaliers (4-8, 1-7).

The Hokies are in no way the same team the lost two straight games to start the season three months ago. Since then, the Hokies (10-2, 8-0) have won 10 straight games; became the first team to go undefeated in ACC play since FSU in 2000; and have won at least 10 games in each of the last seven seasons, the longest such streak in Division I-A football (Football Bowl Championship).

The Hokies locked up the ACC’s Coastal division with a win against the Miami Hurricanes, but the win over the Hoos gave Tech a perfect 8-0 conference record. The Seminoles were undefeated in ACC play in 2000, but the Hokies are the first team to do it since the league expanded in 2004. 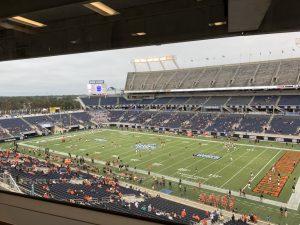 Speaking of Florida State, the Maryland Terrapins beat N.C. State on Saturday, which means the Hokies will play the Seminoles (9-3, 6-2) for the ACC title on Saturday, Dec. 4, in Charlotte, N.C.

Back to the UVA game, senior quarterback Tyrod Taylor led the Hokies to a lopsided 30-point win over the Wahoos. And on a day meant to honor the seniors of the team, it was a true freshman who helped send his elder statesmen out on a winning note.

This time last year, Kyle Fuller, the younger brother of former Hokie great and current Tennessee Titan Vincent Fuller, had played all of two high school football games during his senior year. Twelve months later, the true freshman found himself starting for the 13th ranked team in college football, in place of injured senior cornerback Rashad “Rock” Carmichael. Fuller led the team in tackles with 10, including eight solo and three for a loss. He was all over the field and seemed to be involved in almost every play.

Offensively, the Hokies struggled in the first half. Their two touchdowns were set up by the defense; an interception by Eddie Whitley returned to the UVA five-yard line, and a defensive stop on an attempted fourth down conversion. In fact, the Hokies went three-and-out on its first three possessions, prompting boos from the sold-out crowd at Lane Stadium.

After that, however, Tech found its rhythm and scored touchdowns on five of its next six possessions. Senior place kicker Chris Hazley, playing in his only season as a Hokie, booted his 19th straight field goal, adding to his school record. Hazley has not missed a field goal since his first attempt of the season against Boise State.

Running backs David Wilson, Ryan Williams and Darren Evans combined for 169 yards rushing and all three tallied a touchdown. Meanwhile, Taylor had his usual solid game, completing 13 of 23 passes for 176 yards and one touchdown, a 20-yarder to Wilson.

The Hokies are aiming for their fourth ACC title in seven years, but will have to get through the Seminoles next Saturday to do it. Tech lost the last matchup between the two teams, 20-30, in Tallahassee in 2008. The Hokies are just 1-13 in their last 14 games against FSU with the lone win coming in 2007 in Blacksburg, 41-20.